If you still don’t know Proscenic, we encourage you to continue reading this article to discover a brand whose products are characterised, above all, by their good value for money. The Taiwanese company has been innovating and improving the manufacture of its smart home appliances for more than 25 years. Today we want to focus on three examples that will become your best cleaning ally: Proscenic P11 Vs P10 Pro Vs M8 Pro. Don’t miss our comparison! 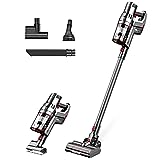 The three models we are going to analyse have one particularity, and that is that two of them are broom hoovers while the third is a robot. Do you want to know the main features of each of them?

We start with the Proscenic P10 Pro, one of the two cordless hoovers featured in this review. The first thing that stands out is the power, which is rated at 260 watts and 23000 Pascals of suction. Moreover, this power can be regulated in 3 levels via the LED display incorporated in the body of the hoover. And thanks to the VBoost technology, the hoover detects carpets and automatically intensifies the power. The tank size is not bad either, with a capacity of 650 ml. The Proscenic P10 Pro offers a run time that, although advertised by the brand as 55 minutes, users report that in practice this time is reduced to 40-50 minutes. What is positive is the 4-stage filtration system, including a HEPA filter. Last but not least, the P10 Pro is equipped with a multi-flex rotating main head, which swivels 90 degrees forward and 180 degrees left and right. It can also be used as a handheld hoover and is equipped with a smaller motorised brush.

In case you are not very familiar with the world of robots, let us tell you that the ones that move by means of a laser navigation system are the most advanced because they are the ones that achieve the highest precision. The Proscenic M8 Pro is powered by IPNAS 4.0, a laser technology that, in addition to improving its orientation, allows it to create highly detailed, interactive, multi-level maps. You can customise these maps through the mobile app, to schedule cleaning throughout the house or only in certain rooms. In other words, you can delimit restricted areas or virtual walls, as well as rename rooms.

Another reason why the M8 Pro stands out is that, in addition to vacuuming, sweeping and mopping, it is also capable of mopping. For this purpose, it has an additional 300 ml water tank. In terms of power, it achieves a not inconsiderable 3000 Pascals, surpassing many competing models. In addition, both the power and the water flow rate can be adjusted in three different levels.

The autonomy of use of the robot is about 4.5 hours, and it has an automatic recharge function. And to make it more independent, it is equipped with a self-draining base with a capacity of 4.3 litres. In this way, it is the robot itself which, when its internal tank is full, automatically deposits the waste into the base. Finally, if you have a smart device, such as Alexa and Google Assistant, you can sync it with the robot.

We round off our review with the second cordless upright hoover, which in this case is more advanced than the P10 Pro. Mainly because it has scrubbing functionality, unlike its smaller brother. For this purpose, it has a tank with a magnetic cloth that you can place on the head itself. Beyond this novelty, the Proscenic P11 integrates a digital brushless motor that achieves a nominal power of 450 watts and a suction capacity of 25,000 Pascals, also surpassing the P10 Pro in this parameter.

The versatility offered by the P11 is no lesser, since, in addition to being used for scrubbing, it can also be converted into a handheld hoover. And, among the complements it contains, the main head with LED light is joined by the small electric brush, the narrow nozzle and a round brush. Like the P10 Pro, it has an LED display and its four-stage filtration system is super advanced.

And when it comes to run time, it lasts approximately 60 minutes on a single fill. Of course, you can optimise the power by switching between the 3 levels of regulation it offers. And, like its rival, it is able to identify the carpet weave to modify the power automatically. As for the tank, it also has a volume of 650 ml.

Factors to consider when choosing the best hoover

If you are deciding to buy a cordless hoover because of its convenience of use, it is important that you know what aspects to focus your attention on. If you don’t, you will find it more difficult to compare performance. In some cases it may be better to spend a little more money if the added features justify it, but you can only know this if you have the criteria to compare them:

As we have already mentioned, two of the models in the review are broom hoovers and the third is a robot. Therefore, it would not be fair to compare the three exactly equally, as the robot is twice the price of the two upright hoovers. So, if you’re thinking of getting a robot, let us tell you that the Proscenic M8 Pro is packed with some pretty smart features, but it’s priced lower than many of its competitors. Especially those from big brands like Roomba.

If your decision is more in the direction of a broom hoover, you can compare the performance of the two Proscenic models. And, to be honest, the Proscenic P11 is more worthwhile. Although it is more expensive, it is not exorbitantly priced compared to other similar models, and it has very advanced features. It is capable of vacuuming and mopping, achieves impressive suction and improves the overall performance of the hoover.

So think about what kind of hoover you want before comparing in depth. And, if you’re still in doubt, you can always check the reviews that other buyers have left on Amazon.